Get me outta here!

2014 has been a slow start for the Fishing Freaks as both Wez and I have made big changes in our work careers and have been finding it tough to fish together and even finding time to fish! And then when we do fish we BLANK so to say that our 2014 Summer has been a bit of a disappointment is an understatement!

However we are determined to get Fishing Freaks back in action and we are making sure we get on the water more and fish together more! So the opportunity arose one Wednesday Afternoon when i had an avid fan and newbie to kayak fishing Alain Tardin from East Coast Radio come into my studio and say “Come Im calling Wez and we going for a paddle!” Alain has just got his new Stealth 525 from Brett so he has been itching to get on the water, I then told my boss that i am ahead of my work so im going for a fish!

An hour later and we were on the water at one of my favorite fishing spots on the Kwa-Zulu Natal coast, Umdloti and it was a cracker of an afternoon with a bit of swell but the water looked amazing with current lines and small bait balls! I wasn’t going to mess around and put couta baits out straight away and headed for the drop off with Wez and Alain in tow! It was quiet we had seen one small snoek jump and also one lonely bonnie and that was it, Wez and Alain tried to find the snoek but i wasn’t wasting my time and stuck to my plan and continued to the drop off.

I got to the drop off checked my macks which were still clean and perfect,so I put them back out and started puzzling what i should do next, just ahead of me was a small bait ball going bananas on the surface so i took a slow paddle up to them to see what they were and as i came close to them i could see these big fish swimming underneath my ski, it took me a few seconds to realize but it was a huge shoal of Kingies!!!! So i drop my Onda down and let it sink to the depth the fish were and jig it back slowly a few came and had a look but none had a go! So i changed over to the Williamson Slick Jig Olive colour knowing that the bait ball was small sprat so im trying to match the hatch, I cast it into the bait and let it sink for about 10 seconds and start a quick retrieve jigging style and within 3 winds BAM!!!! ON and my reel was screaming!!!!! WOOOOOOOOOOHOOOOOO i started screaming calling Wez and Alain over, i get the fish to the kayak and its an awesome little Black tip Kingfish my first on a Kayak and new species for me! 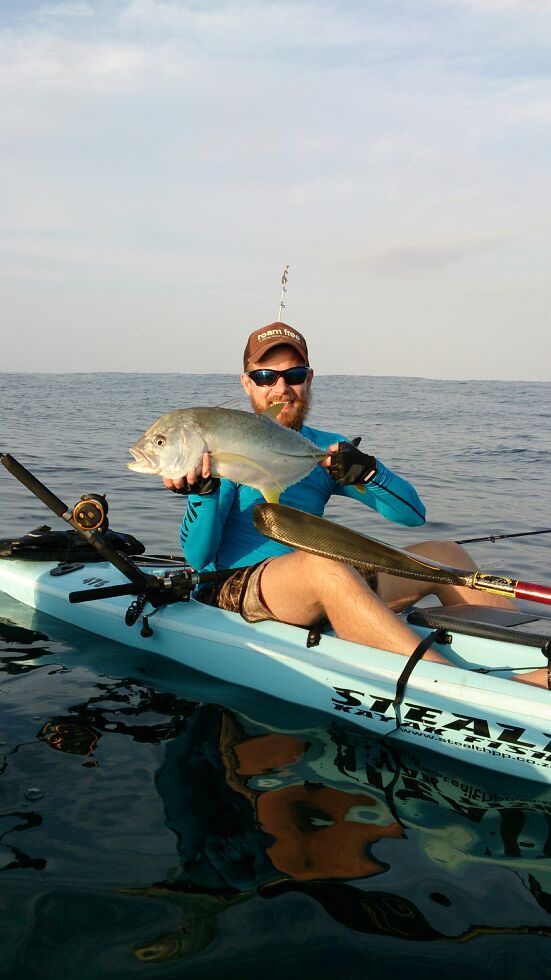 Wez gets the pic for me and i release the kingy pick up my flick stick and throw again into the bait ball let it sink click over the bail arm 3 winds and BOOOM ON AGAIN!!!! YESSSSS PLEEEEASE!!!!! Woooooooooooooo man it was a JOL!! Now Wez and Alain are trying to find the right lures to put on in a hurry as they can just check me bending and screaming!!! For the size of the fish these kingies have power and just too much fun to catch! Get this fish up next to me pick it up out the water and its a beautiful Threadfin Kingy, another first and new species for me so im grinning from ear to ear.

Alain then goes on and he starts shouting with excitement, turns to Wez and i and goes this is how you make a fishermen happy!! I release my Threadfin and cast again into the bait ball let it sink click over 3 winds and ZZZZZZZZzzzzzzzzzzzzzzzzz on AGAIN!!!! 3 out of 3 I could not believe my luck Wow what a jol , all this time poor Wez is still trying to find the right lure and get a hookup, i then get the fish up after a good 8 minutes and its another Black tip Kingy, I was really blown away at the strength these fish have they really know how to box. 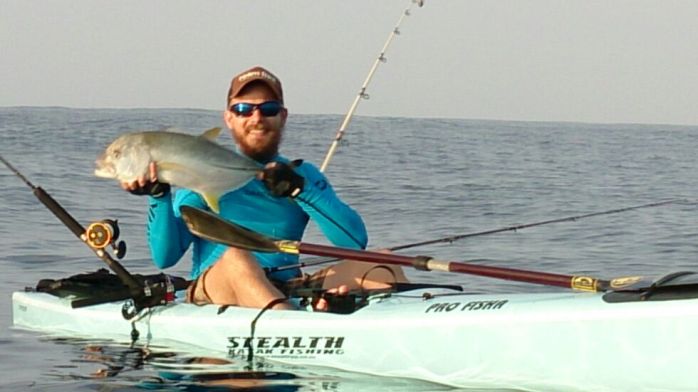 As the sun went behind the hill they went off the bite and we paddled in, what a great afternoon on the water and some new species to tick off my list. Its amazing how catching a fish can change everything for a fishermen, just having a fish on the line and having it peel line off your reel! This is why we fish and this is how you keep a FREAK happy.

The UKFC (Umgeni Kayak Fishing Club) is our local fishing club and every year they host and awesome competition with fantastic prizes and we were lucky enough to be invited to fish and to film the day at Umdloti, so take a look what we got up to and how the day went!!

Being Called The Fishing Freaks is a name we live by and we are absolutely nuts about Fishing. Here is a video of one of the Freaks showing his undying love for the sport and proving just how freaking crazy he is about Kayak Fishing.

We Freaks thought we would have our own Throw Back Thursday and replay you our very first video we put on Youtube our Fishing Freaks Teaser!

We have come along way since this vid got uploaded and boy it been one hell of a ride! we have been through many high’s and low’s and almost lost a Freak along the way, We have learnt a lot and it has been tough but we have meet some amazing people in the fishing community and picked up some incredible sponsors that have have been like childhood dreams for us and then there is you guys our fellow FREAKS, you guys have been unbelievable and we cannot thank you enough for all the support and feedback, you guys rock and you are keeping the Fishing Freaks dream alive!!

We have some amazing stuff in the pipeline for Fishing Freaks and all we can say is watch this space, cause these Freaks are going places! Season 2 of Fishing Freaks will be out soon and we really cant wait to show you guys! we got some action packed webisodes coming your way, so just hang tight!! In the meantime lets go back to the 22 January 2013 and relive the hype of Fishing Freaks!!

Big thanks to The Kingfisher , Daiwa and Stealth Performance Kayaks

This multiplier reel is more commonly used by the rock and surf angler because of its free floating spool, making it great for casting. It has a sealed Water Proof oversized drag with Super Corrosion Resistant Ball Bearings (CRBB) making this a Freakin tough little reel!!

So we here at Fishing Freaks have put this ” Rock and Surf ” reel to the test on a kayak and well we can’t say anything else other than BRILLIANT!!! We use it on a lighter rod setup making it perfect for chasing snoek , pulling plastics and even pulling dead baits on the surface but you could easily put this reel on a heavier outfit and target monsters. Its Rugged Corrosion Proof Graphite Frame makes it strong and cable of taking the beating its gets out on a kayak, also Its water proof seals and CRBB is what you need on the water and Dick has dropped his in the ocean a few times and still catching fish with it! Another great thing about this reel is that you can also put it on a rock and surf rod and go do some night fishing for Kob. We here at the Freaks give this reel a thumbs up for Kayak fishing!

So head down to the boys at The Kingfisher and have a look at this brilliant and affordable reel for .

As you all have seen lately we The Freaks have been paddling new Kayaks and man can i say we are in love with them!!! We have been lucky enough to demo on Stealths Pro Fisha 475 kayaks the past few weeks and have really put this Fishing Ski to the test!!! 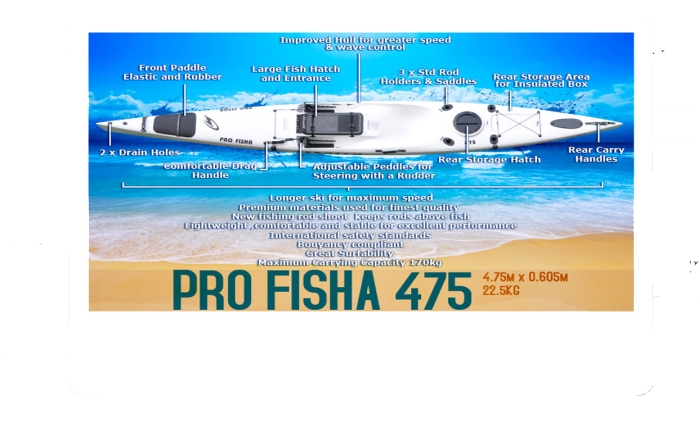 We have done drifts in the howling wind, paddled 8km’s out , trawled lures at the same speed as Jetski’s (well it feels like that) been out in big surf and have taken them to Moz and we can really say that this is a GREAT Fishing Kayak!!  It not only handled all the conditions the ocean threw at us , it had us out on the water at every opportunity we have had and we can happily say we have Fished the most this past month then we have the whole year!!! 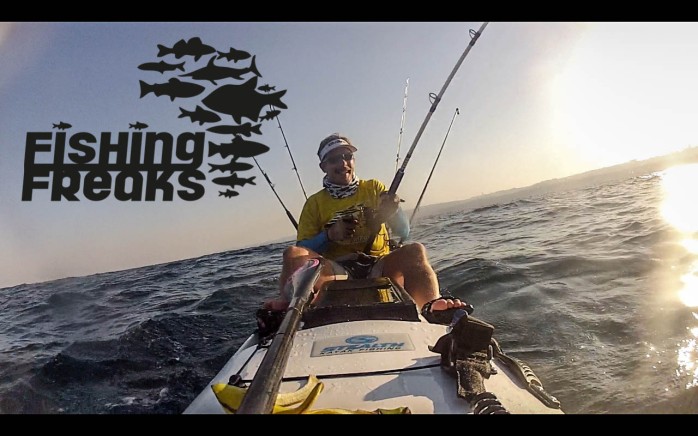 The boys at Stealth have really out done themselves on this range and the Pro Fisha just looks FREAKIN Awesome!! Its pointed nose and tail lets the ski cut through the water with the greatest of ease making it super quick and helping out big time when paddling in the wind, but don’t be fooled into thinking that now that it is fast and pointed on the ends it is going to loose its stability because it doesn’t , it is so stable , even in the WIND, and such a pleasure to fight and catch fish on, it has a comfy seat and paddling position making spending hours on the water not so grueling on your butt and back. Punching big waves is not a problem as long as you hit the foamie straight on you will glide trough it like a hot knife through butter, and coming in is a reel ease on these ski’s because of its speed and can easily paddle in between the sets, but it can also ride waves, does take a little practice and to know how the wave is breaking , we have found though that if you do get caught in a foamie you just turn the ski side on put you inside leg in the water and ride in like that no problem! The hatch is big enough and can carry five rods and a couple of fish easy! 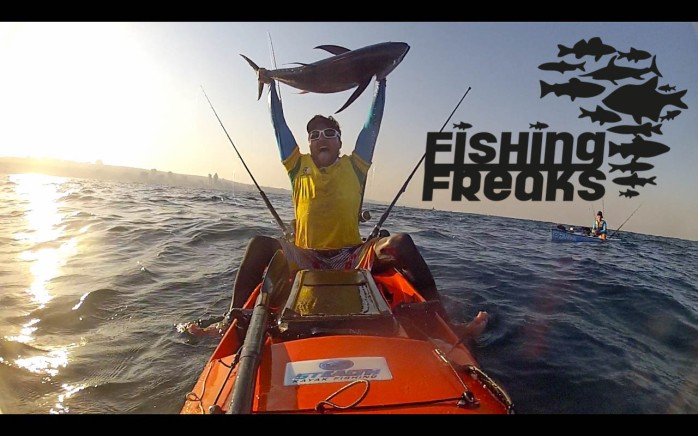 So if you are in the market looking for a Fishing Ski or just wanting to upgrade to a more performance driven Ski go see Brett from Stealth and order yours today!! The Pro Fisha’s come in the 475 , 525 (just released) 575 lengths.

We cannot wait for our custom 475’s to be finished and we will have a whole video on the construction of these great Kayaks coming out in the next few weeks so stay tuned for that!!

This is the first official episode in the first Web-series of Fishing Freaks. The start of the season introduces Wez & Dick, kayak fishing and the fruits of catching fresh game fish!